I am sitting here typing as 2 more gallons of tomato sauce that I canned are boiling away on our stove, plus 6 more quarts of fruit compote. On Saturday night I canned 3 gallons of tomato sauce all with organic tomatoes that were soft and had been squished, all left-overs from the farmer’s market. There is so much fruit and vegetables here in the bay area during the summer it can be overwhelming just thinking about it. I took the day off yesterday from the stand and instead went to the Free Farm where SFCare was holding a sock drive for the homeless and a picnic with vegan hotdogs. When I came back to the stand to help clean up the second delivery of produce came a bit late and there was still a line of people getting food. I wound up bringing home a box of soft peaches and nectarines and a lot of ripe tomatoes. There are orchards of fruit I hear about that need picking and gardens I haven’t had time to harvest from, including more potatoes in my backyard. (I harvested 16 pounds of  beautiful spuds from a somewhat shady 28 sq ft spot or about 1 3/4lb potato per square foot). I would say we could definitely use some help with canning. We need a phone tree that has people on it to call who  can glean or can on short notice. Having a vehicle or way to pick up surplus produce would be helpful and having the equipment on hand and jars would be useful too. If anyone has extra canning jars around that they would want to part with that would be helpful as I see more soft fruit and tomatoes in our future. While I am at it we can also use wide mouth jars for sprout kits.

Mike ran the stand plus our regular crews of fabulous volunteers made it all happen. Brittany and I collaborated on making a sprout making kit and she assembled, attaching a small cartoon booklet  how to grow sprouts to jars with screen rubber banded on top and red clover seed inside. I also made 4 pounds of sprouts and they were handed out at the bread table (the sprouts I think were put on the hummus, tomato, and bread Mike was handing out). The kits we given out to people that like eating the sprouts and wanted to grow some themselves. I love growing sprouts and giving them away, but I also feel like anyone can grow sprouts and I wanted to encourage people to try growing some of their own food even if they don’t have a backyard.

Did I mention we had a record amount of tomatoes and eggplant that we got left over from the farmer’s market? 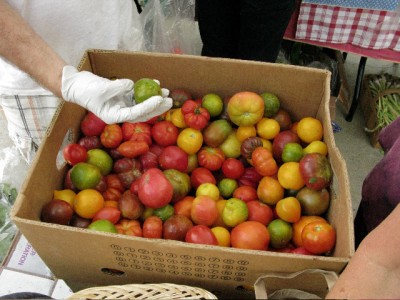 When I got to the stand Mike gave me a taste of a delicious Armenian cucumber and he said some people from a farm in David came by with a lot of them to share (apparently they were pretty big). Also, I noticed a friend of mine named Wendy came by with a giant overgrown zucchini. It probably could feed quite a few people. 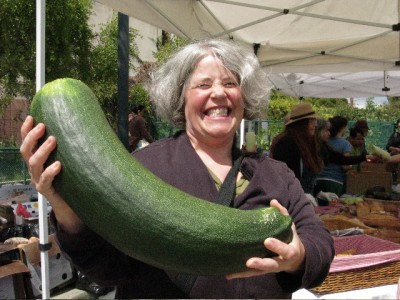 The Free Farm Stand now has a face painter. It has become a real children’s event!

The Free Farm Stand will be remain open during this time of “shelter in place”. We will be pre-bagging the produce and start handing  out bags at noon and encouraging guests not to hang around. Since the park is closed we are across the street on Treat Ave. and 23rd St. in the parking lot of the Little Giant Lighting Company on 3050B 23rd Street (entrance and parking lot on Treat Ave.). It goes really fast now, so get there when we start, because by 12:30 it may be gone.

Right now we are limiting the number of volunteers since we want everyone to be safely 6 feet apart, but if you want to help in the future please contact us to be on a list. Also, we are a unique program and try to distribute fresh, locally grown organic  produce if possible. If you can help with that, like if you garden and can grow extra produce or flowers for the Stand or know of fruit trees that can be gleaned let us know. We often give out starts and we can help if you want to garden with advice and other resources. Just contact Tree.

Finally, since we are pre-bagging produce we are in need of 13 gallon size plastic  bags (unscented) and/or large brown bags. Also, disposable gloves are also needed. Thanks